Seefried Industrial Properties in a joint venture with Clarion Partners, LLC, have delivered a brand new 1.1 million-square-foot distribution center for an e-commerce company.  Located on North Normandy Boulevard along the east side of Interstate 4, this building is the largest distribution center in Volusia County and is spectated to bring 500 new jobs to the area.  Additional building features include 34,275 square feet of office space, 1,034 auto parking stalls and 350 trailer parking stalls.  Construction on the distribution center began just nine months ago, making this one of the fastest traditional non-sortation builds in the program’s history.

“With the rising demand of e-commerce and population growth in Central Florida, Deltona’s strategic location along the I-4 Corridor is perfectly positioned for this new project,” said Paul Seefried, Senior Vice President of Seefried Properties.

“Clarion Partners is proud to deliver another successful development with Seefried”, said Andy Sitzer, Clarion Partners Senior Vice President of Acquisitions.  “We appreciate the team’s contributions look forward to continuing to expand our partnership with Seefried across the U.S.”

Developing the 1.4 million square foot distribution center on North Normandy is Seefried Industrial Properties. This is the fourth massive sized project developed by the firm in the past year.

Seefried Industrial Properties is a nationally-recognized leader in industrial real estate, with over three decades of development, leasing and management experience in core markets throughout the U.S.  In business and privately owned since 1984, the company has been trusted for its transparency, consistency, financial strength, leadership and vision and today remains dedicated to providing efficient and economical solutions that generate competitive advantages for tenants and investors.  Seefried provides a full range of development services from land acquisition and entitlement to construction, leasing and project management.  Since inception, the firm has built over $9 billion in development volume in 25+ markets across the U.S.  Seefried is based in Atlanta, with regional offices in Los Angeles, Dallas/Fort Worth, Chicago and Phoenix.  For more information, please visit www.seefriedproperties.com

The Conlan Company was the general contractor; Kimley-Horn was the civil engineer; Ford & Associates was the architect for the project. 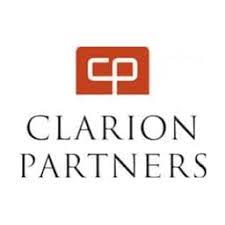 Clarion Partners, LLC, an SEC registered investment advisor with FCA-authorized and FINRA member affiliates, has been a leading real estate investment manager for over 38 years. Headquartered in New York, the firm has offices in major markets throughout the U.S. and Europe. With more than $56 billion in total assets under management, Clarion Partners offers a broad range of equity and debt real estate strategies across the risk/return spectrum to its more than 400 domestic and international institutional investors. More information about the firm is available at www.clarionpartners.com

The Deltona City Commissioners voted unanimously to approve an incentive package worth almost $2.5 million for a major distribution center, Amazon!

The City of Deltona welcomes Amazon to our City! The project represents the most recent, and largest win from the City’s ongoing economic development efforts. 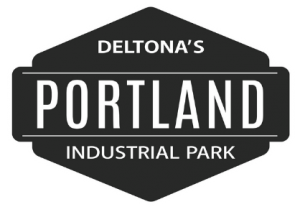 The project will result in the construction of a 1.4 million square foot fulfillment center, built on an 85 acre portion of the new Portland Industrial Park, located at the Interstate-4/SR 472 Interchange Area. The City plans for this area to be an employment center of regional significance.

Over time, Amazon is expected to employ five hundred (500) employees, with an above average wage of thirty-two thousand dollars plus full benefits. The City of Deltona’s Economic Development Manager, Jerry Mayes stated: “This project is the result of nearly a decade of planning to attract and support select industries to the City of Deltona. It is gratifying to have collaborated with so many partners, all of whom welcome the Amazon Fulfillment Center as the first company in our Portland Industrial Park”.

Eric Alexander, the President of the The Deltona Business Alliance, added: “The project will not only bring hundreds of jobs to Deltona, with a variety of pay scales, but will be an impetus for commercial growth in the area that we will see explode.” Mayor Heidi Herzberg summed up the big news by stating: “Deltona’s strategic location along the I-4 Corridor will serve Amazon well, and hosting Amazon telegraphs the fact that Deltona is open for business. Analysis of the site confirms it as a prime location. And Amazon’s selection of the site represents great employment and economic development opportunities for Deltona, its residents and neighboring communities.”

As the first major project in the Portland Industrial Park, Amazon’s presence will help define the area as a major upcoming business center. The ability to attract additional large employers will simultaneously create economic opportunity for Deltona businesses and residents, while helping to diversify the City’s tax base. Longer term, the City will continue to actively recruit new business to this expanding employment center located on I-54 4. 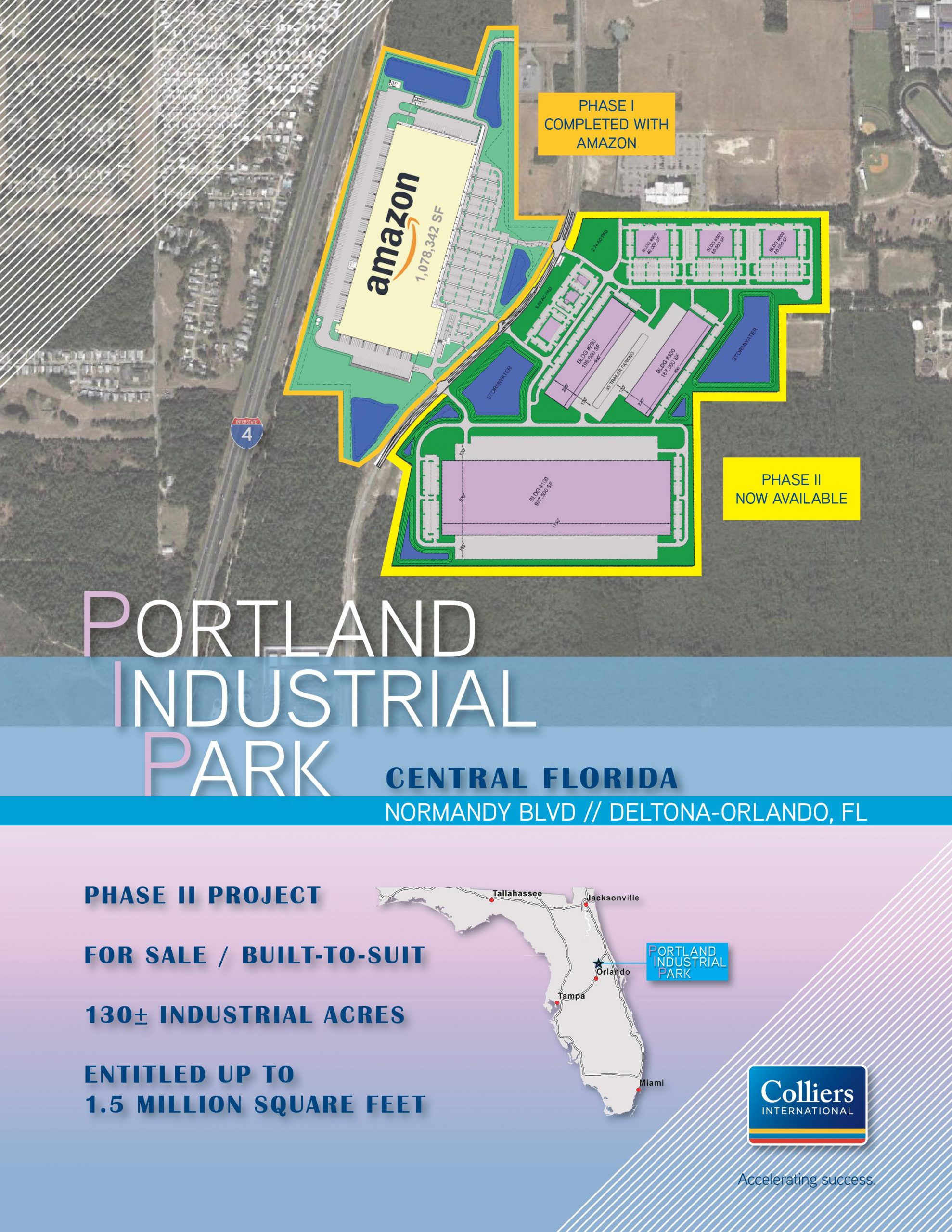 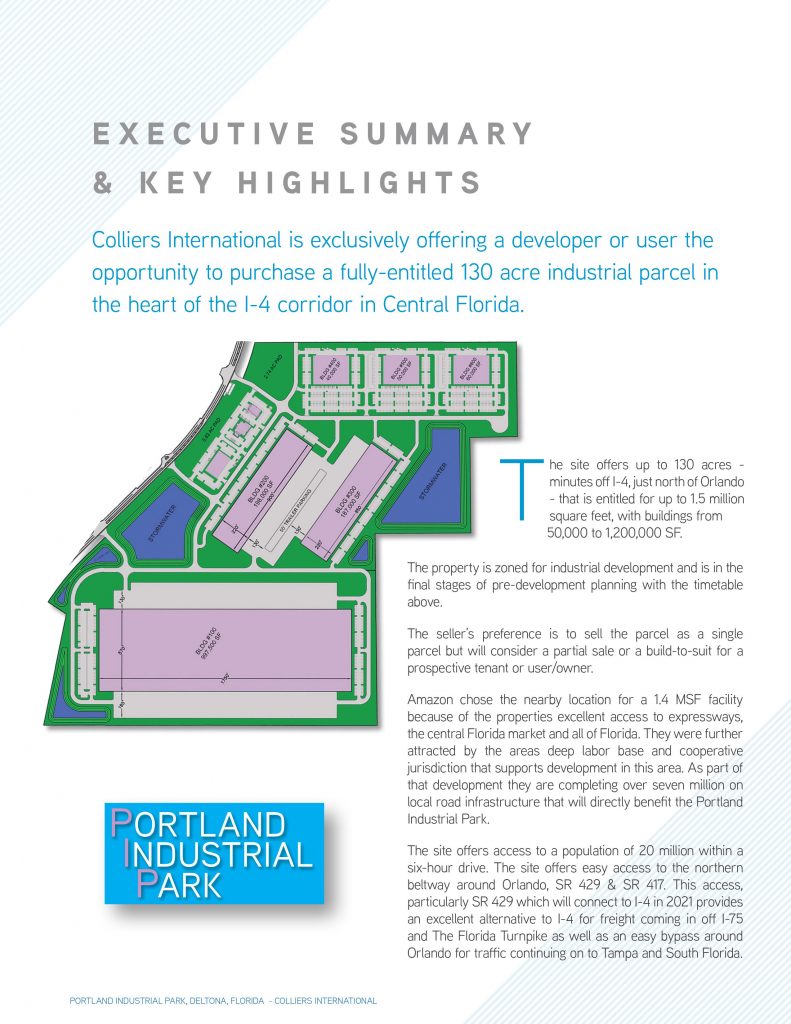 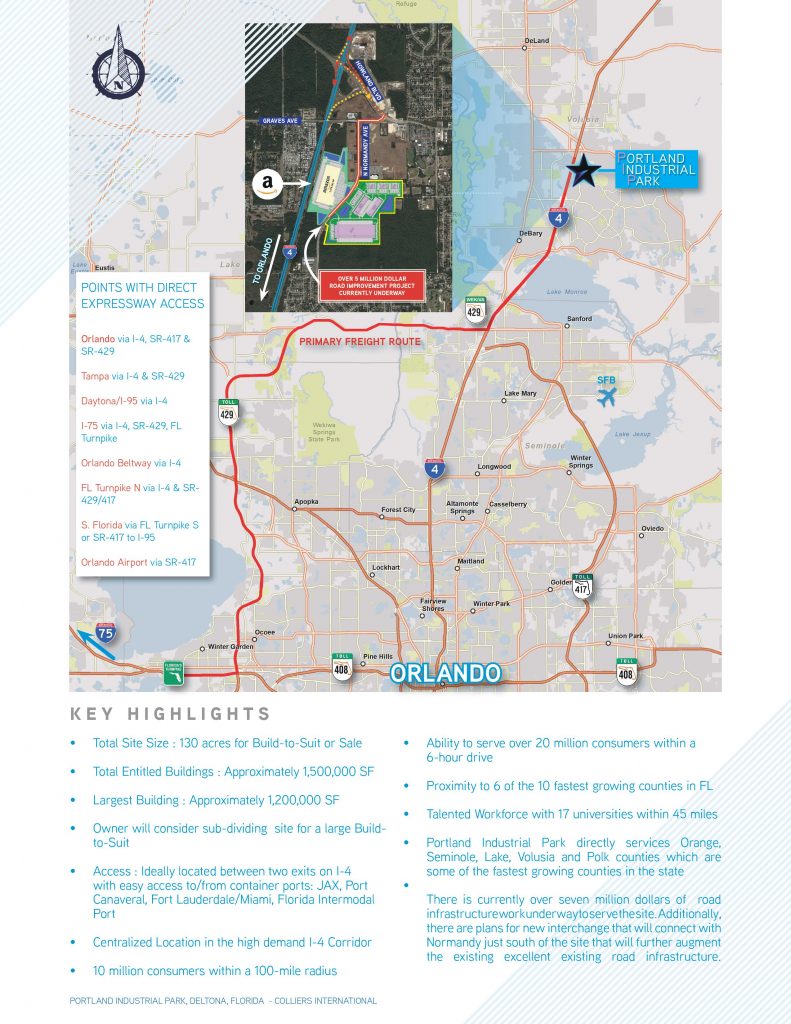 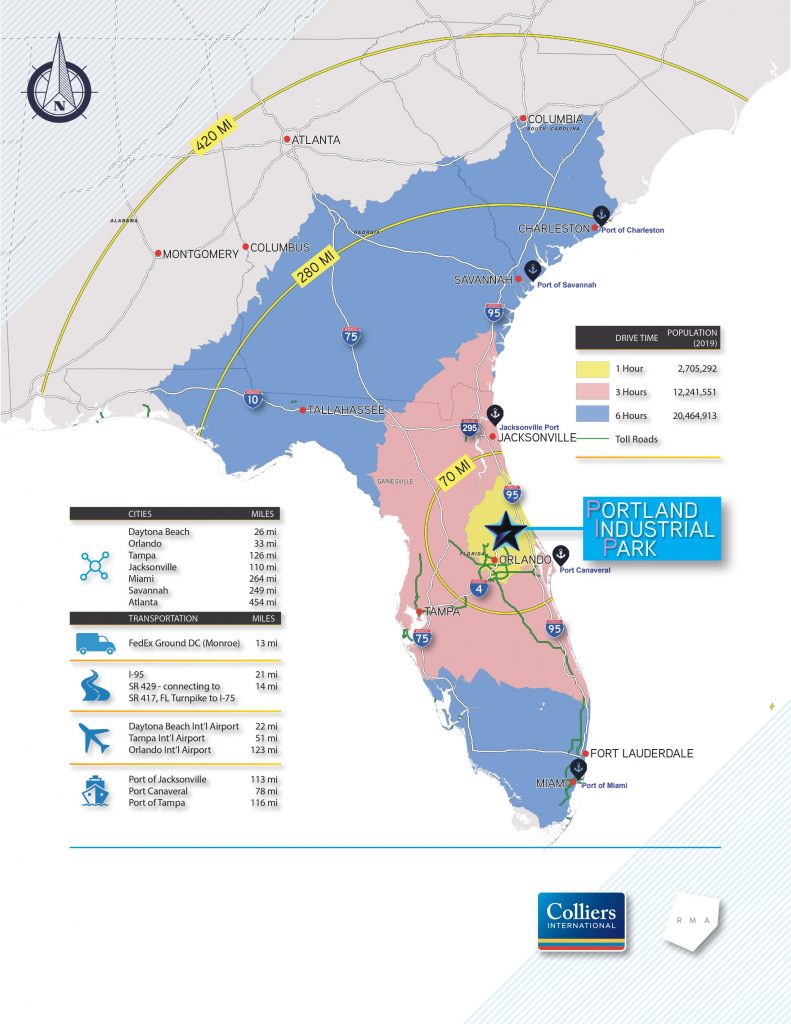 Amazon has invested over $5 billion in Florida since 2013

With fulfillment centers being developed throughout the state, including a November announcement of a facility in Auberndale, Florida which is in the Winter Haven-Lakeland area, Deltona is the latest announcement by Amazon. This

construction project being the largest city between Orlando and Jacksonvile, and the last high-traffic location along I-4 to yet be developed, Deltona and its’ workforce are ready to get to work. There are an estimated 500+ jobs to become available at Amazons’ Deltona location. This exciting announcement is attracting new businesses to the area and locations along Howland Boulevard as well as throughout the city are starting to be developed, creating even more jobs and revenue for the city.
Deltona, a city on the move!

“Portland Industrial Park, which is 250 acres of logistic-based development just off Howland Boulevard at Interstate-4 now has it’s first business in development, Amazon, with a 1,000,000 square-foot logistics center. You heard about that, right? Seriously, think about it…that’s 23 acres of concrete. That’s 500+ new jobs guaranteed. The rest of Portland industrial park is going to have more logistics. Plans include an additional 1-million square-foot logistics center building, another building at 198,000 square feet, and a third at 178,000 square feet. Then, we still have opportunity for additional light manufacturing concepts.   That could easily be 2,000 or more new jobs. It doesn’t just happen. It takes planning, hard work, spirit and dedication. But we’ve been working on it for a while and you can see the fruit of our labor as we plan the work and work the plan.”

Recovery Resources for the Coronavirus PDF