The City of Deltona was originally developed as a rooftop or retirement community. Our city has become much more than just a wonderful place for Families to rest their heads and call Home. We’ve experienced tremendous growth over the past few years in the areas of Ecological Tourism, our Medical Arts Districts and the Industrial/Logistics center at Portland Industrial Park, featuring Amazon.

Deltona is the perfect mix of Recreation, Entertainment, Eco-Tourism and Nature. With over 21 parks, many nature-based, and World-Class Trails, Deltona is an Ecological Tourism destination for visitors from around the world. Visit DiscoverDeltona.com to learn more.

Deltona’s newest Medical Arts District offers the best resources, technologies, and location along the I-4 corridor. Situated between Deland and Orange City; The Halifax Health/UF Health property is made up of multiple parcels which add up to 131+ acres. AdventHealth Deltona ER is also here in our neighborhood along Howland, near I-4 for when patients need care close to home. We have the Advanced Cardiovascular Surgical Center at Deltona, offering Interventional Cardiology with in-office Nuclear Cardiology and Echocardiography Laboratories. This new office is located at Howland Crossing near “The Center at Deltona” a new first-class community center. Family Health Source (FHS): Family Health Source, a local clinic within the City, has expanded to a 25K sqft. location within the City’s CRA District (1200 Deltona Boulevard, the “Deltona Plaza”). FHS has decided to keep the DuPont Plaza location open as a clinic to serve the east side of the City.

We also have Amazon at Portland Industrial Park. This project has resulted in the construction of a 1.4 million square foot fulfillment center, built on an 85 acre portion of the new Portland Industrial Park and located at the I-4/SR 472 Interchange Area. Just across the street is “Deltona Village” the new mixed-use 150 acre master planned property allowing over 900,000 square feet of mixed commercial development, with entitlements already in place. Deltona Village is open for business. Anchored by the EPIC Theatres of West Volusia, which in 2016 was the highest grossing theater of all theaters in St. Johns, Flagler, Volusia, Brevard, Indian River, and Saint Lucie Counties! 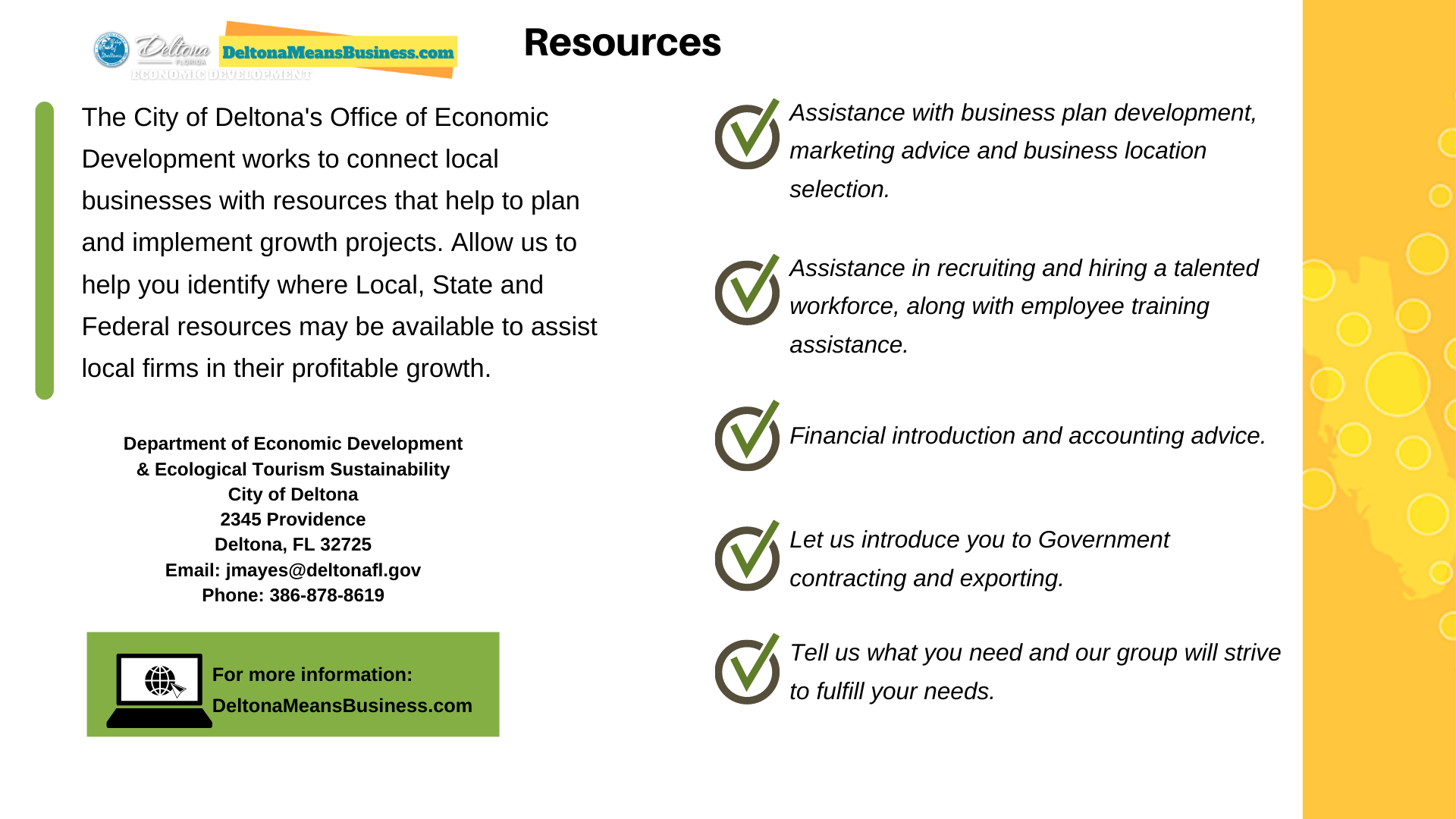 In the July 2021 issue of Florida Trend magazine, Deltona is featured. The article compliments our trails, our growth in Medical Arts and other businesses, including all of the great opportunities which now exist along I-4 and the Howland Power Corridor. Location is the key to much of our success. Many people talk about Amazon and ask, “How did you manage to get Amazon to build in Deltona?” It’s what many would call a blessing, the location is right off I-4 and the project went from concept to completion in fewer than 18 months. Between Portland Industrial Park and Amazon, Deltona Village, Halifax Health/UF Health and all of the other new, smaller businesses in that area, we’ve developed a lunch/dinner crowd. That area is ready for more new restaurants, hotels and businesses.

One of the challenges that we’ve had for our residents is the lack of restaurants within the city. We’re forced to travel over to Orange City in search of a good place to sit down and eat. There are quite a few restaurants in the city next door, especially along Saxon Boulevard near our other I-4 interchange. In the video below is an interview from “Chamber Chat” on Deltona Television, featuring Deltona City Commissioner, Victor Ramos. The Commissioner discusses this area along Saxon and I-4 in Deltona and Orange City and shares an image of the area regarded, showcasing a cluster of businesses along Saxon Boulevard in Orange City. In the interview Commissioner Ramos states “The key there is that they have sewer.” 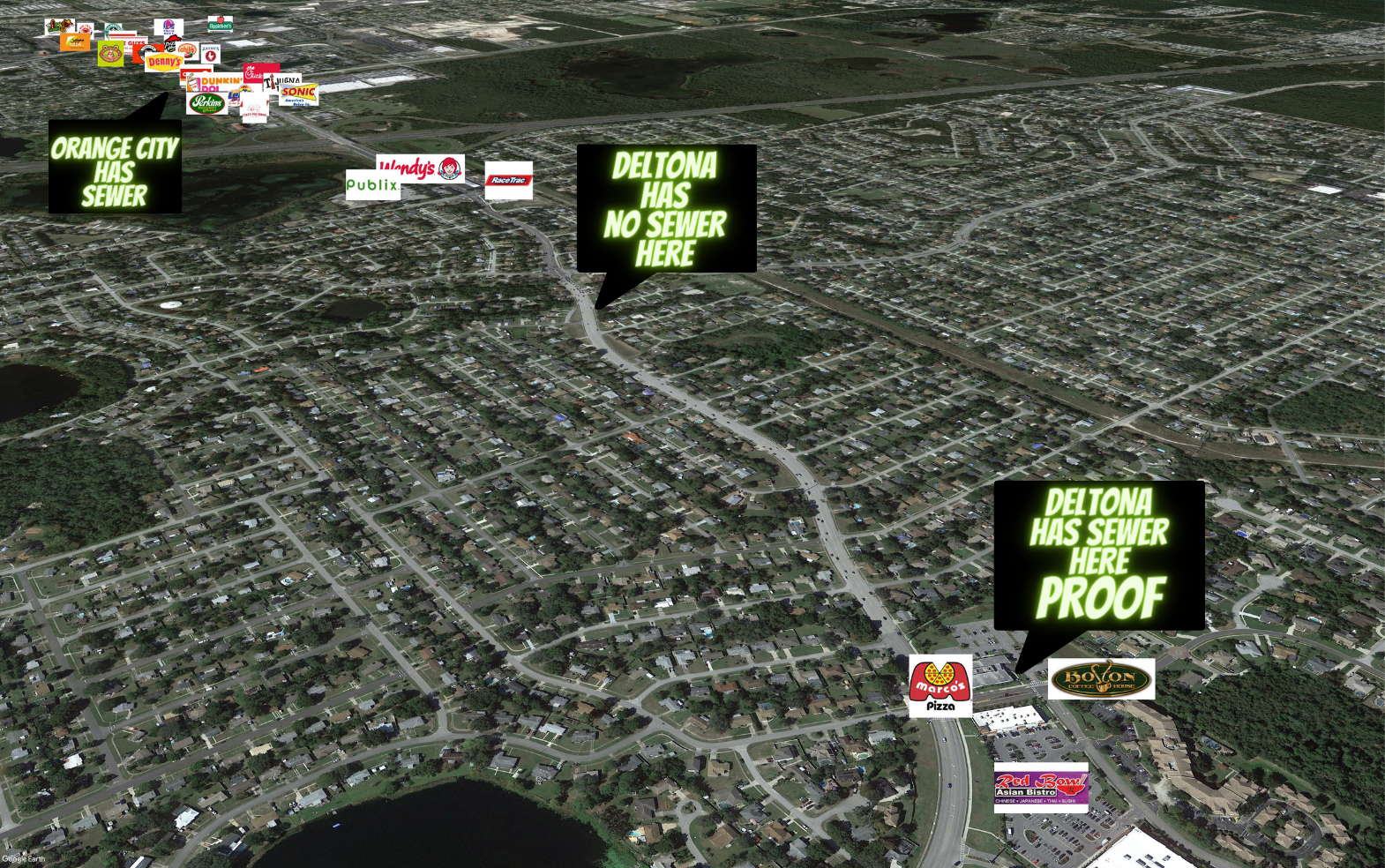 It’s quite noticeable that there is a long stretch of road along Saxon Boulevard from I-4 in Deltona which has literally no businesses at all. But why is that? Why doesn’t Deltona have more dining choices in this area? We certainly have the traffic. The answer is that there are no businesses along that section of Saxon because there is no sewer. It is apparent that there is a small cluster of businesses as one heads east, deeper into Deltona with Marcos Pizza, Red Bowl and the Boston Coffeehouse. That’s because there is sewer in that location. This is one of the many benefits along the Howland I-4 Power Corridor -sewer service, enabling new businesses. Deltona still has a challenge in bringing development on Saxon near I-4 -utilities. There is plenty of discussion about Saxon Boulevard and creating utilities so that Deltona can then bring in new restaurants and businesses. Having sewer service is very important to the City of Deltona, its residents, visitors, neighbors, and leaders.

In the “Chamber Chat” interview, hosted by Sherry DeCrenza of the West Volusia Regional Chamber of Commerce, Commissioner Ramos made a point of clarifying that concern isn’t about forcing people into sewer, the importance is opportunities to make sewer available so that Deltona can have businesses in the city. In response to Victor’s statement, Sherry exclaimed “I think a lot of people in the general public don’t realize what the holdup is and seeing a map like this, I think will really explain it to you because obviously a big business can’t come in and have a septic tank.”

“As we continue to work with Saxon Boulevard and continue to work at providing utilities in these areas, I think you’re going to see Deltona starting to emerge again.” -Commissioner Victor Ramos, District #5  -Deltona, Florida

The City of Deltona’s Office of Economic Development has developed a business retention and expansion program to retain and expand local business in key industry clusters, encourage job growth in the local corporate base and provide technical assistance to local companies. We demonstrate a coordinated effort among our business partners to keep our valued employers successfully operating in Deltona.

The “Workforce Engine of Central Florida” Deltona exceeds 108,000 people (5 miles) with a workforce of over 45,000 – the largest city between Orlando and Jacksonville along the I-4/I-95 power corridor. Deltona has achieved staying power. Our city offers a wealth of opportunity, a friendly business climate and easy access for development, retail supply, employee commutes and customers.