A City on the move!

Earning the Employee of the Year-Economic Enrichment award on May 23, at the 2019 Volusia League of Cities Distinguished Service Awards: 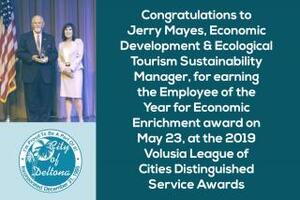 It’s very evident when you attend a grand opening in Deltona that businesses are here because of Jerry Mayes. As the City of Deltona’s Economic Development & Ecological Tourism Sustainability Manager, Jerry is in the business of convincing businesses to come to Deltona. It’s because of his persistence that Halifax Health is building a hospital here and Advent Health has built medical facilities here. It was Jerry who made the ‘famous’ call to Halifax Health seeking an opportunity to discuss the development of a much needed hospital in Deltona. Rafael Ramirez, Halifax Health, said “Jerry demonstrates tenacity, but is totally professional and well-informed. His work habits are second to none. He ‘bleeds’ Deltona and is its most loyal employee. Thank God that the City Manager and the City Commission keep changing his mind on retirement. I also warned him I’d stop construction if he retired”

It’s because of Mayes’s persistence with Halifax, Advent Health and others that Deltona will soon have that “lunch crowd,” a much-needed workforce to open the flood gates for restaurants and retail residents are clamoring for. Most of that is already being realized in the Howland Boulevard corridor. Others would have given up, but not Jerry. Mayes is good with residents. We might have a room full of residents not pleased with development, but after Mayes addresses their concerns, they leave happy about Deltona’s growth.

Jerry might be a bit more “green” than the average developer. His failed attempts at becoming a world-renowned turkey hunter, naturally has given him a genuine appreciation for the outdoors. Mayes led the effort in Deltona becoming a Monarch City, a State-designated “Trail Town” and in the Lakeshore/Community Center area becoming a State-designated Trail Head. Plans for the Eco-tourism Village are in the works too! His other plans are for Deltona to become a Pollinator City and a Blueways City, ready for recreational use of water trails as well as reducing and eliminating chemicals that are harmful to pollinators, our food system and the planet. He has a passion for making Deltona an Eco-Tourism destination and has a wonderful vision of how the Lake Monroe/Lakeshore Drive is a key component in Deltona’s economic future. 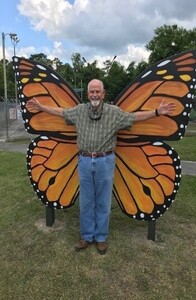 Good things are happening in Deltona.

Deltona is committed to helping those who want to begin and advance their careers in our growing city. There are abundant Training Resources and Grants available. These training programs are designed to benefit both the workforce and the business. So together, we may grow.

Currently planning a new building to the Deltona Campus, with educational programs specializing in Health Services and Manufacturing.

Currently working regionally with Seminole County on raising the training and skills of the southwest Volusia County labor force.

The Volusia partners are the cities of Deltona, DeBary, DeLand, and Orange City.

This video provides the names of several resources for workforce development, education and training.

The City of Deltona is now in Year 7 of the very successful Ten-Year Medical Expansion Program for “Medical Arts Districts” in the Deltona Activity Center area, plus other commercial clusters within the Deltona. At the (1) Deltona Activity Center, the (2) Community Redevelopment Area (CRA), and the (3) Saxon Medical Arts District, there are several projects being advanced to initiate a major medical hubs to spur development within these areas, promoting jobs growth and employment hubs for medical use and ancillary businesses supporting the job-holders.

The physical construction of the Halifax Health Emergency Room is completed and open. Construction of the six story bed tower now deals mainly with the interior of the building. Halifax Health has received approval of a 55,000 Square Foot Medical Office Building (MOB) as a part of this project. This $150+ million project will become a major job creator and economic driver for the Deltona Activity Center’s ‘Medical Arts District’ and the City of Deltona. The hospital is projecting to open in the 3rd quarter of 2019. Of note, on November 7, 2018,

(a division of Hospital Corporation of America) announced plans a free standing emergency facility in the Deltona Activity Center area. CFRH has received the rezoning for the property. When completed, this expansion into the City will initially mean the creation of 50 or more new, in-city medical jobs and become a major part of the City’s ‘Medical Arts District’. City staff is awaiting CFRH’s revised submittal.

Acquired the former 5/3 Bank building at Courtland and Ft Smith Boulevards and is currently doing a renovation. FCP has also developed several offices that they will be able to utilize as either future expansion or lease.

The commercial sewer expansion project would facilitate future commercial growth in this prospective business corridor of the Community Redevelopment Area. The City has elected to complete this project and funds are appropriated in the City’s budget and will greatly assist in the recruitment of businesses to that area. This development will coincide with the planned FDOT expansion of Saxon Boulevard.

On July 7, 2016, the Southwest Deltona Community Redevelopment Area (CRA) was formed. The goal is revitalization of the CRA area through utility and transportation improvements. The City is preparing for sidewalk repairs and ADA compliant sidewalk improvements, among other projects. This is a redevelopment backbone for the City’s original commercial area. The owners of the Deltona Plaza have informed the OED that “The Plaza” is now fully occupied and additional new development, in the areas of the parking lot near Deltona Boulevard, are being considered.

The announcement of the development of a retail based project at the DeMarsh property (Epic Theatres and Epic Theatres Corporate Offices in Deltona Village). The plans on developing the 160-acre parcel of land in front of the EPIC Theatres’ corporate headquarters and theatre. These plans include major retail, grocery, offices, apartments, restaurants, and more.

The Deltona City Office of Economic Development works to connect local businesses with resources which help to plan and implement growth projects.

Let us help you to identify where local, state and federal resources may be available to assist local firms in their profitable growth.

Working with Deltona’s existing businesses to provide assistance through mentoring, workshops, education and opportunities to build a stronger business foundation.

For even more resources please visit the “Business Resources” section of our website.